Some additional information in one line
Abbey Piazza

As a Community Marketing Specialist, Abbey nurtures and…

How Modern Campaigners are Turning Engagement into Impact

These days it is very difficult to stand out in a crowded digital environment. That’s why modern organizations are increasingly embracing more meaningful advocacy tactics.

How do we know?

We reviewed countless industry studies, conducted our own user research with over 70 social movement organizations, and monitored over 17,000 campaigns and 60 million civic messages to decision-makers that have been facilitated by New/Mode.

All of the organizations we’re about to highlight use New/Mode’s sophisticated civic impact features in tandem with the customer relationship management software provided by the HubSpot CRM.

Our findings show that advocacy campaigners are shifting from traditional “civic engagement” (focusing primarily on engaging audiences of supporters) to “civic impact” (campaigns that embrace strategies and tactics that have a real impact on communities, power, and policy). 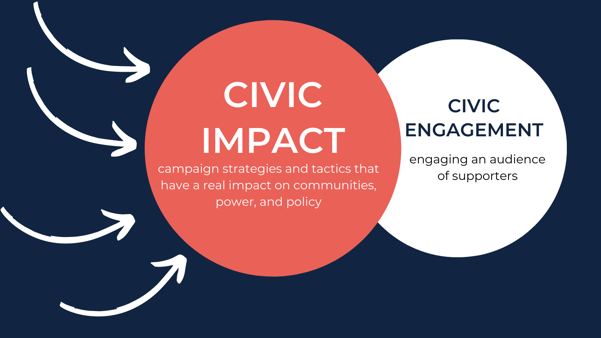 There’s a renewed drive for advocacy campaigners to build real lasting relationships with their campaign supporters and to ensure our campaigns have a clear theory of change towards measurable policy impact.

The desire for tangible civic impact is a natural response to the growing compound issues our world is facing: wealth inequality, housing crises, racial injustices, and the climate crisis, – just to name a few!  Our work is too important to rely on symbolic campaign tactics, such as petitions that are never delivered to a decision-maker.

For example, the book Prisms of the People studied six successful movement organizations over a long period of time and found that all organizations were designed to encourage and foster community power. To build community power means having a body of supporters that are:

1. Flexible: an adaptable group of people and can shift direction easily even when the political terrain changes on a dime (because it can, and will!).

2. Committed: loyal and dedicated supporters to the organization, its cause, and to each other.

3. Independent: not connected to or reliant on any major donors or outside resources/influences.

A shift in power allows organizations to shape the political agenda overall and this conclusion aligns with previous studies focused on influence over policy and government decision makers. For example, a study of US congressional staffers from the OpenGov Foundation found:

“it’s nearly impossible to change a [Congress] member’s mind overnight. (...) Those changes take more than a spike in activism. They take consistent input over the course of years. That type of halting progress might seem to run counter to the non-profit’s mission, but in fact, it is central to it.”

Not every organization is set up to embrace all the practices laid out in Prisms of People but there are many opportunities to begin the process of building community power and policy impact that the authors describe in the book.

To that end, the Full Spectrum Engagement Framework is a great resource for those who want to deploy digital advocacy programs towards building a flexible, committed and independent constituency.

In this post we’ll show you how some of the world’s leading advocacy organizations are embracing these advocacy tactics in real life.

Optimizing the Ladder of Engagement 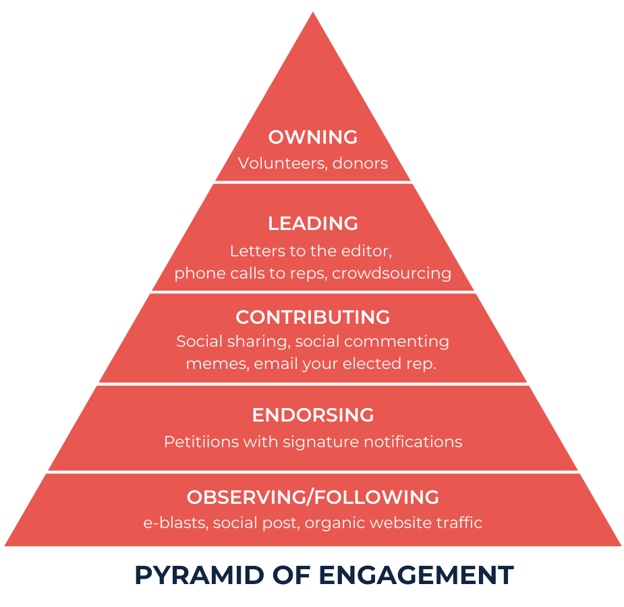 What about the middle? Often we overlook what we call the "missing middle." The middle of the pyramid has supporters who have already taken a low-barrier action and are ready to deepen their relationship with the organization and their involvement in the cause. New/Mode's multi-channel advocacy tools are well suited to engage the "missing middle" advocacy actions and our integration with HubSpot makes it easy to identify where each supporter is on the pyramid of engage them accordingly.

How does this lead to policy impact? This way of deepening supporter relationships and building community power also puts your supporters’ voices and stories in every communications channel, making it nearly impossible for decision-makers to ignore. We also know that politician staffers monitor these channels closely, as ongoing deep engagement means potential votes in the next election.

Unfortunately many digital advocates are using outdated solutions optimized for engagement volume and not impact. A traditional supporter journey as shown here often oscillates from petition asks to donation asks without opportunities to deepen impact or relationships.

With this old tactic supporter engagement and political influence decreases over time. We also know it alienates the supporters and that it doesn’t lead to tangible policy impact.

It often works best to start a campaign with a low barrier action like a petition, but have the petition signatures sent directly to a decision-maker (as opposed to hosting a symbolic action). For example, the Private Equity Stakeholder Project and LittleSis are using a petition to target the Kennedy Center, the Harvard Corporation, the National Gallery of Art, demanding they remove The Carlyle Group's David Rubenstien from Chair of the Board of Trustees. Rubenstien is a private equity executive who is investing billions in fossil fuels.  Supporters are reaching these institutions through the petition and insisting they act on their values and put people in leadership positions who care about our climate.

Leveling up Action, Engagement, and Impact

Next follow up that action with a deeper, more impactful action such as tweeting at decision-makers, submitting personal letters to local papers, and getting supporters on the phone with the staffers of our political representatives. HubSpot users can set up automatic workflows that trigger follow up emails inviting supporters to do a deeper engagement action after a specific period of time.

Partnership to End Addiction is using New/Mode’s email tool to email members of Congress and ask them to support mental health and addiction care for pregnant and postpartum individuals.

Taking the next step towards a deeper, more impactful action, Greenpeace used a tweet action in the past to pressure Chrystia Freeland to adopt a wealth tax in her build back better strategy.

Putting a donation ask between some of these calls to actions is a good way to make a financial ask that doesn’t interfere with the flow of a supporter engagement journey and narrative. Asking supporters to donate to help you launch the next tactic is often effective. So something like:  “We know reps pay close attention to their local papers. Donate now so we can launch a powerful Letter-to-The-Editor tool that will get your voice into those papers.”

Taking a further step to deepen engagement and impact, here is a snapshot of Rocky Mountain Wolf Action Fund’s used New/Mode’s Letter to the Editor action in 2020 to advocate for Colorado’s Wolf Restoration Initiative.  They won the statewide vote to reintroduce wolves by a margin of 51% in the middle of the pandemic. 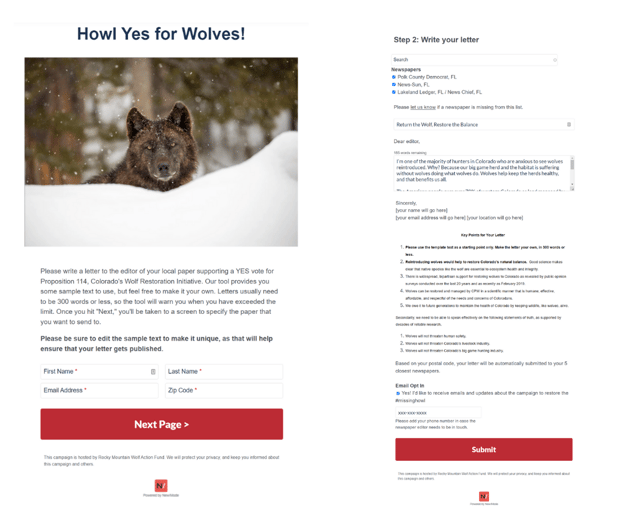 If you think about this from a decision-maker’s perspective – you can easily ignore a symbolic petition, but having constituents messaging you from every direction translates to issue commitment and likely votes in the next election. 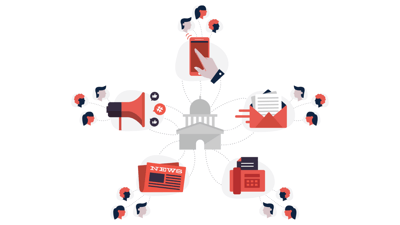 In addition to direct policy impact– when we look at electoral outcomes, a study from the Analyst Institute found that when you couple ongoing multi-channel advocacy engagement with Get Out The Vote efforts, you get a 50% higher turnout rate.

It is essential that advocacy campaigners aim for impact, getting tangible results and wins for our communities. Multi-channel digital advocacy tactics provide one way to make that a reality, by building real relationships and community power.

We’re here to help. Please book a call with one of our campaign advisors if you’re interested in learning more about how New/Mode supports this type of work.

As a Community Marketing Specialist, Abbey nurtures and engages New/Modes’s dynamic community through organizing top training in the digital organizing field and facilitating mutually beneficial partnerships. She has experience directly coaching New/Mode subscribers on digital advocacy best practices. Before joining New/Mode, Abbey worked as a Provincial Organizer for Dogwood BC, where she played an integral role in engaging and mobilizing volunteers. Previously, Abbey designed and implemented strategy for two successful election campaigns and fundraised for the Wilderness Committee, one of Canada’s most significant environmental charities.