Under the leadership of Canada’s former Conservative Prime Minister, the country’s environmental laws were systematically dismantled to remove most protections for clean air, land, and water. Justin Trudeau’s new Liberal government made a promise to adopt better, fairer environmental assessments for reviewing new pipelines, mines, and other projects that impact the environment and communities, and was asking citizens for input.

Similar to the US Democratic Party, Trudeau’s Liberals are also very business-friendly, and Canada’s dirty extractive industries have outsized political power. Environmentalists had to build their own power - in all regions of the country and both official languages - quickly, in order to be a counterweight. And, let’s face it, environmental law frameworks are pretty boring stuff. The challenge for environmental groups was first to tell a compelling story, and then to reach and effectively engage enough citizens in demanding change, all within a very tight public comment time frame. 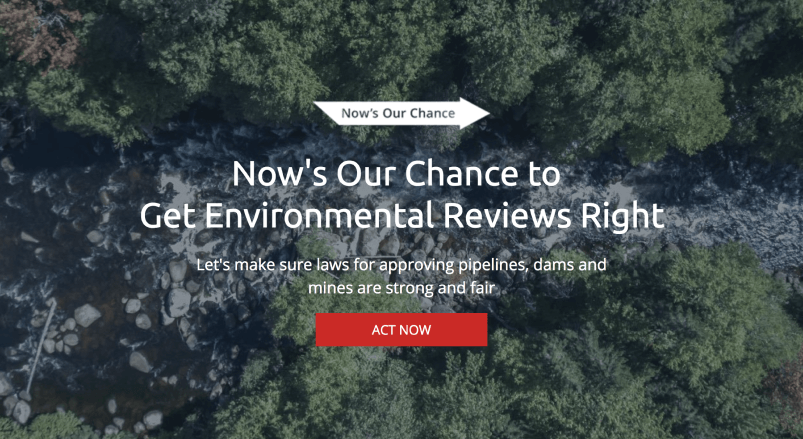 Building a network around the issue, the agency managing the campaign knew each partner would want control over their own message, brand, and supporter list, and there was neither time nor budget for lengthy coalition or data sharing agreements. They created a unique “cloned campaign” approach, building custom landing pages for each partner group, each embedded with New/Mode “email your rep” and “letters to the editor” tools. The tools were quickly deployed and promoted via email, social media, and targeted Facebook ads in key geographies.

40,000 separate letters were sent to elected representatives across the country, a significant measure of public support. The coalition quickly grew to include over 30 groups, who created almost 60 cloned websites. While conversion rates varied, the average was 66%, significantly higher than usual. Partners were able to say yes to the campaign quickly and deploy almost immediately because of the way they could control their own actions and story easily using New/Mode tools. The law framework is still under review but the network continues to grow and will deploy more actions at the right moments of truth in the future.