Lack of affordable child care has become one of the biggest pain-points for young families today. Fees are too high, available spaces too low, and too few families have the ability to choose quality options. Almost everyone agrees the current situation is a crisis for parents, children, employers, and underpaid childcare workers. After 20 years of inaction, the issue was ripe for being solved by a big change in government, and that’s what the women behind the $10 a Day Child care plan set out to do.

It’s almost beyond most of our memories for an election to be fought around a vision of a new social program. Even some progressive politicians had previously shied away from big bold ideas for fear of being seen as overspenders. The first challenge was to make the $10 a day childcare plan an irresistible centrepiece of this progressive party’s election campaign. Then they had to help them win on it. 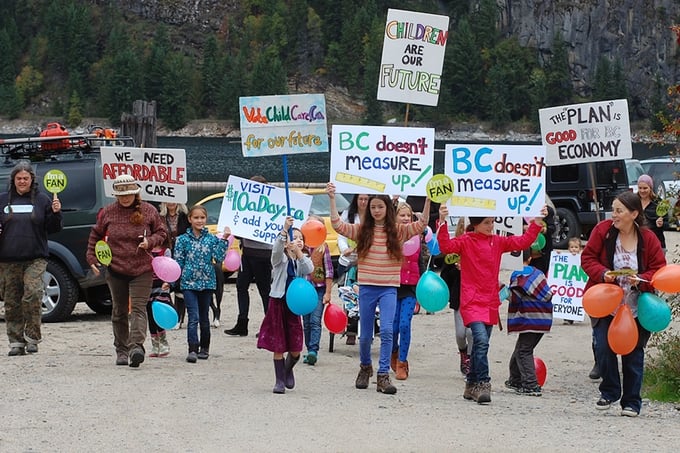 The $10 a day campaign had built up an impressive and diverse base of support. From Chambers of Commerce to major employers, they positioned the issue as a top concern for everyone who cares about families and children. The challenge was to activate those who are often not as engaged in politics as they could be to make the issue a top concern. With media outreach and social media storytelling, “stroller brigade” protests to effective social communications, the campaign showed up everywhere. New/Mode tools were initially targeted in part to sitting politicians based on our representative lookup features, coupled with insider meetings and sharing polling numbers. Once the party made $10 a Day child care a centrepiece of New Democratic Party’s election strategy, $10 a day supporters were unleashed on the election itself. Thousands of messages to local politicians and newspapers helped make this one of the top issues of the 2017 election.

The campaigners combined New/Mode's targeted engagement approach with a NationBuilder website/CRM, which was brought together with excellent design and implementation by Vancity Studios.

Largely a volunteer-run campaign, the numbers tell an impressive story of engagement. Almost 5,000 messages were sent, including over 2,100 directly to candidates. 1,600 messages were sent to the new government once it was elected reminding them of their election pledge, including over 300 thank you letters after their budget. In February 2018 the NDP government announced the first bold steps in implementing the plan: A 1 billion dollar investment commitment over three years. It was a historic win for the campaign team and the tens of thousands of supporters across the province and around the world who made it happen.